So, after NYC I’ve kept my eyes more open and been more attentive of what is going on around me – before I would be very attentive but only because I still felt I was traveling and having super control of my stuff etc – and I came to the conclusion that that is the only reason for why I’ve been bored in Sthlm, I shut down during the winter and forgot to enjoy the small stuff… SO – yesterday I met this wonderful man:

I’ve just left the La V Photo Studio and said Good bye to Vera, Gleb, Nina and Alesya at the same time that they let me print pictures to leave for my friends as a memory… since I accidentally printed too many copies of one photo the paper costed me a bit more and I didnt have cash for the metro – so I passed this big food market on St Ambroise and from there I take the metro at Lionel-Groulx instead of Place St Henri as usual..
I’ve just sat down when an older man (he didnt look that old neither fragile so that’s why I describe him”older”) enters – “Should I get up?” I think, and I almost don’t because he didn’t look like someone who’d like to sit and maybe I offend him, but he was obviously not 40 so I decide it’s at least a nice gesture. I motion to him to take my seat while I’m getting up and he comes at me with a smile, take me by the shoulders, put me down on my seat again and says “You don’t have to get up for me, I’m only 80!” =D Big smile, returned by an ever bigger smile

“REALLY? You do not look 80! Maybe 70, but 80, really?”
“Yeah, I turn 87 this spring”
I sit there and ponder this info for a while
“It’s all about exercise”
“True, never stop moving”
I can’t stop smiling, what a nice man. I thought he would get off after just a few stops but when he doesn’t I see we have time to talk.
“So, what kind of athlete are you?”
“Oh, I just do regular exercise, I walk 4km a day..”
“Wow! On the way to work or afterwards?”
“Well, you see I don’t work ;) I have been retired for 23 years” – It was so hard to imagine, that he was not working and was that healthy that he could enjoy 23 years doing whatever he wants.. isn’t it great and at the same time hard to imagine?
“Yeah I walk, and on rainy days I work on the machine – I lift 50kg weights and do 28 push-ups”
“Every day?!” – “No, I used to do it twice a week when I was younger, now I do it once a week”
He stands there for a pause, he’s much taller than me and since I’m also sitting down he must bend a bit to talk to me.

Then he leans down and tell me the greatest secret of all.
“And lets not forget, the most important thing: sex 3 times a day” he chuckles and his eyes twinkle, like a mischievous boy!
“THREE TIMES!? FOR REAL??” At this point I’m wondering if anyone else is listening to our conversation or if it’s filtered out since we speak in english – I just felt like this is something that everyone should hear, it at least made MY day :D
“Yes, my daughter asked me ‘Dad, do you still have sex’ – I said ‘OF course! – two times in a row; once in the spring and then in the fall..” He looks mysterious, I can’t make out if the spring and fall thing was a metaphor but it would be rude to ask more about his private life than what he had already told me…

After that I learn many other things about him but after this information nothing sounds as amazing – he still goes scuba-diving at 87 and he doesn’t look a day older than 65-70. I know his full name and I took a picture of him before I left my spot to meet my friends at Laïka for our “last night” together – but I won’t tell it here since I want to protect his integrity somewhat ;)

Thank you, pretty old man
I left that metro with a big smile and felt I was glowing 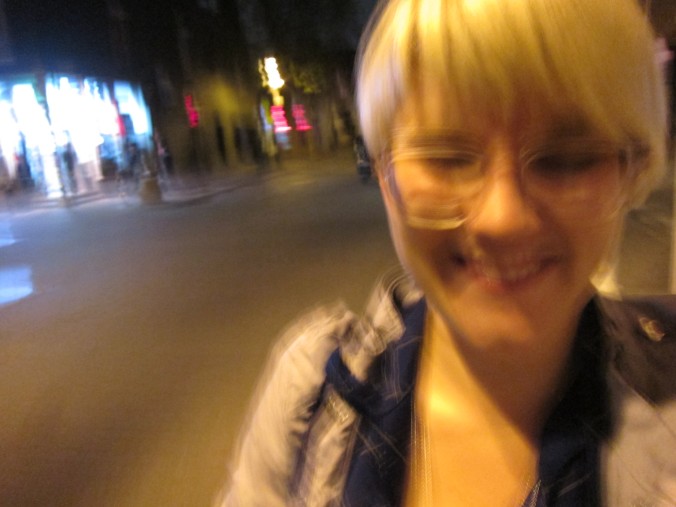 4 thoughts on “Dedication Mtl – 1.Let me introduce you”